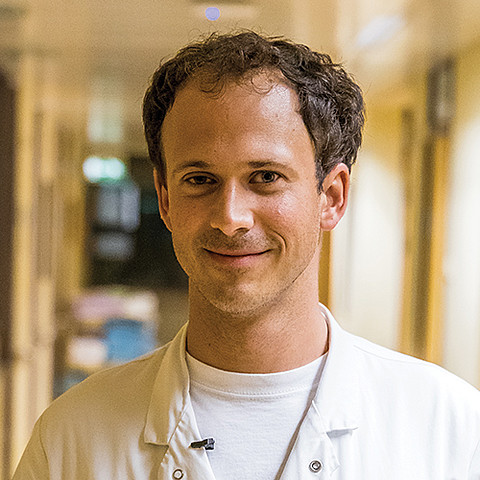 Science is a labyrinth of different pathways

Tomaž Rus, MD, a resident of neurology from the Division of Neurology of the University Medical Centre Ljubljana, is honoured to be one of the finalists of this year's International Medis Awards, because over the recent years, some of his colleagues whom he greatly appreciates received the award. As he says, science is a maze of different pathways, and only some lead to the goal. Finding these paths, however, is often challenging. The nomination for the IMA is also a confirmation that his work so far is on the right track.

He assesses his research environment as very good, because

I am very lucky to work in an environment which is extremely keen on research work. The Division of Neurology has a Research Unit headed by Prof. Zvezdan Pirtošek, PhD, who encourages us, young doctors, to conduct research. My mentor, Assoc. Prof. Maja Trošt, PhD, who introduced me to the interdisciplinary field of medical physics early in the course of my neurology residency, where we combine foremost knowledge of neurology and nuclear medicine, also offers me invaluable support. We collaborate excellently with colleagues from the Department of Nuclear Medicine. It is precisely interdisciplinarity and the possibility of international cooperation that add value to our work. I learned a lot from my colleagues at the Feinstein Institutes for Medical Research in New York, USA.

In his research, Dr. Rus and co-workers studied biomarkers of neurodegenerative diseases expressed as movement disorders, i.e. parkinsonisms. Several different types of parkinsonisms are known which initially occur similarly, but their prognosis is very different. In their research they studied metabolic brain patterns that are specific to different types of parkinsonisms and which can be used to distinguish among them early in the course of the disease. These specific brain patterns can be obtained by analysing brain networks on the FDG-PET brain images which show metabolic activity of the brain. In their research, they tested for the first time the ability of a fully automated differential-diagnostic algorithm in real clinical conditions. They established that analysis of the FDG-PET brain images with an automated diagnostic algorithm improved the diagnostic accuracy of parkinsonisms by 10–20 percent.

explains Dr. Rus who is very pleased with the development of his expert field. Nowadays, neurologists know how to treat strokes if the patient gets to the doctor fast enough. The treatment of multiple sclerosis had advanced immensely, and effective symptomatic methods of treating Parkinson's disease are also available.

But we are all eagerly waiting for a major breakthrough in the treatment of neurodegenerative diseases. Dementia in particular is one of the major public health problems. I hope and believe that this breakthrough will happen soon,

said the optimistic Dr. Rus who likes to spend his time outside the hospital with his wife Katarina and children Peter and Julia, especially on Sunday trips when they can forget for a moment about the epidemic which is a constant in medicine during this time.